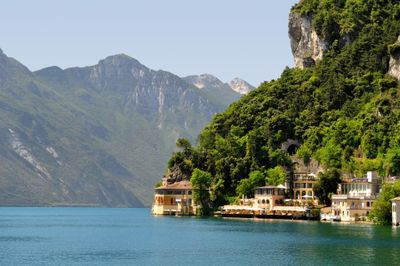 Get married in a private island

You’ll need to ride a speedboat to get to the island, and as you get nearer, you’ll see the view of Villa Borghese Cavazza. It’s a family-run Venetian neogothic hotel where all the magical moments of your Italian elopement will unfold.

What makes Garda Island the best choice for couples looking for an outdoor wedding venue is that it’s filled with all the amenities for an Italian destination elopement.

As you approach this extraordinary villa, towering cypresses, pines, and acacia trees framing the intricately designed structure will welcome you. Against the villa is a dramatic backdrop of Italian mountains which are partly covered in white rocks and largely dominated by a rich vegetation.

But there’s more to the Garda Island than just a unique villa and a mountainous backdrop. It also offers a calming view of the lake right at its outskirts where the owners added dedicated wedding ceremony spots.

Aside from the view, Garda Island is also covered in rich and vibrant formal gardens. Perfectly shaped bushes populate the garden, making it a fitting venue for your dreamy celebration. You can also hold your ceremony here for a stunning garden wedding, or simply make it an area for the cocktails and reception.

You and your guests will enjoy the radiance of the sun whilst savouring the cool Italian weather even on summer when you get married here. This one-kilometer private island has additional features like the wooden dock jutting out to the lake where your guests can enjoy a closer look on the calm waters.

With all these awe-inspiring features of the island, you’re sure of how unforgettable Lake Garda weddings can be when choosing this venue. 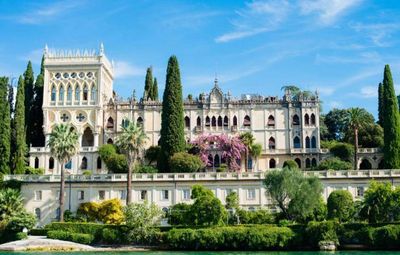 The mysterious and magical Malcesine Castle for weddings

Another stunning venue for Lake Garda weddings is this medieval castle that was built during 500 AD. It’s one of the few Italy wedding venues along the lake where couples can have a legally binding civil ceremony.

For us, the best spot to get married in Malcesine Castle is at the terrace facing the lake. This specific area in the castle has been redecorated for marriage ceremonies. What you can expect from here is nothing less than a stunning view of Lake Garda and the Italian mountains on the opposite side.

Have your photos taken right at this spot high above the castle and you’ll have great memories of your elopement in Italy. Walking on the staircase leading to the terrace may be challenging, but it’s going to be worth it when you see the panoramic view above.

After the ceremony, you can bring your spouse to the wooden dock floating right above the waters of Lake Garda for a photo shoot. Here, you’ll have the castle and the lake for a backdrop! 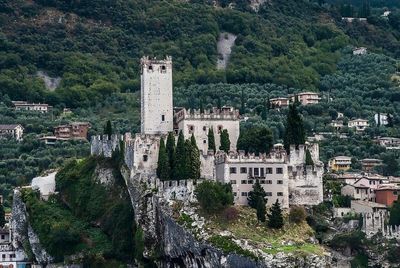 This elegant wedding villa near Lake Garda boasts of astounding natural landscapes consisting of the serene lake and the rolling hills of Garda. They will serve as the backdrop for your lakeside destination wedding in Italy.

The whole venue consists of an 8-hectare park and a beautifully-situated swimming pool right next to the historic villa where you can stay for days to enjoy your honeymoon in Italy.

You don't need to leave this oasis because it has a restaurant to serve you gourmet Italian dishes daily, a charming environment with olive trees and vineyards, and the comforts of an elegant hotel to pamper you for the rest of your stay.

This villa is all you need for an unforgettable wedding and honeymoon in Italy. 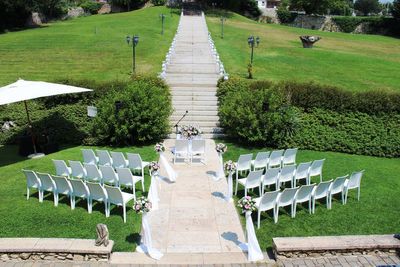 Last but not the least is an elopement venue in Italy right inside the humble village of Torri. It’s one of the most suitable venues for a very intimate celebration that provides two options for the ceremony – either the castle itself or St. John’s Church.

This Italian elopement venue in the province of Verona is a historical center that’s surrounded by medieval walls. We’re particularly in love with the harbour nearby that’s populated by fishing boats anchored on the coast, a view that anyone would love to take a photo of.

The best spot to get married in the castle is up on its terrace where you’ll have Lake Garda and the surrounding mountainous landscape as your background for the ceremony. Schedule the wedding late in the afternoon just in time for the sunset and yours will be one of the best Lake Garda weddings ever!

But if the weather won’t cooperate on your big day, you don’t need to worry. You can hold the ceremony inside Torri del Benaco’s modernized room with parqueted floors. It can accommodate up to 40 people.

Right after the ceremony and just before the reception, you and your spouse can walk along the lemon orchards and olive groves surrounding the venue for your photo shoot. 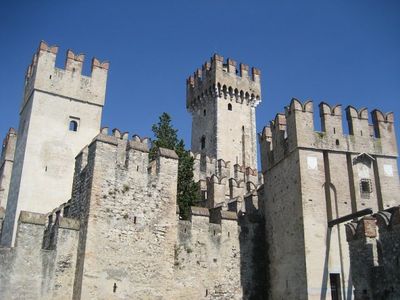 The distinctive features of these Lake Garda wedding venues will certainly make your destination wedding worth all the effort of flying all the way to Italy. We know this for sure since we’ve personally visited all these venues to make sure you’ll have the best options for your Italian elopement. Of course, we can book these venues for our couples. In fact, you can choose one of them to be part of the Italian wedding package you will get from us.

So if you want to have a Lake Garda wedding as beautiful as the ones we just described, contact us.

BlogFAQEnquiry FormBooking Conditions Summary ContactPrivacy Policy
© "Peach Perfect Weddings" is a trademark of Peach Perfect Limited, registered in the Republic of Ireland under Company Registration Number 686334.
Get a quote
Up